What a day, what a day! Alex said she couldn’t believe how I convinced her into this crazy behavior! Ha-ha, and I shall not forget her face when she threatened me -between hysterical laughs- to call the driver or she wouldn’t speak to me again. “It’s not my fault that Naxos makes me feel young and full of life darling” I told her. I still believe it was a great idea to rent motorbikes at our age to discover the inland and see all the pretty villages that I’ve been reading about in my guide book. This outrageous adventure started smoothly, I dare say: Even though we hadn’t driven in ages, we immediately got the hang of it. Dressed to impress, as always, with my Jacky O headband, my mariniere shirt and a bag with two delicious graviere cheese sandwiches, I was on my black motorbike and the world was mine!

We left Chora heading to Apeiranthos village, and it was delightful at first: the breeze was very pleasant and the view amazing as we drove up the mountain. We stopped after Galanado to take some pictures and realized I was thinking about the sandwiches since we began, so we decided to have a small break and eat them. When we took off again it was noon, the sun was reflecting on the road and it was hot; Alex started nagging, how long it would take to get to Apeiranthos , if we had chosen the best route and that we needed another stop to put on more sunscreen… So we stopped again near Kanakari and it took us a while to begin because we wanted to take selfies wearing helmets to send the kids. We laughed so much trying to take the perfect photo that would include us, the bikes and the view; we actually made another stop a few kilometers after, next to a bus full of tourists, asking them to take a descent photo of us… It was so funny! Then we started driving again up the curvy road, enjoying the smell of oregano and thyme from the nearby fields.

After a while, Αlex noticed that her bike was making a strange noise; we drove some more and she signaled me to stop; her bike had broken down. We were in the middle of nowhere, it was hot and we were getting hungry again. Alex was nagging. I called the agency to send us another motorbike but Alex didn’t want to drive anymore and while we were having a fight about it, an old Mazda pick up stops right next to us and the driver, a local farmer asks: Do you girls need a ride? Alex and I looked at each other and burst out laughing! It’s been ages since someone called us girls and yes, of course we wanted a ride, to Apeiranthos if it was possible! A few minutes later, we were on the pickup truck, trying to find balance among piles of watermelons, giggling, feeling completely carefree, embracing the view and the moment.

As I am writing this from a cool picturesque plateia in Apeiranthos, drinking a thick comforting Greek coffee while waiting for our driver, I know this was a day to remember. Naxos has a magical way to transform random incidents into life treasured experiences. Maybe it is the sun, or the people, or the beauty of locations like this one; maybe it is just us. There are places that bring out the best of people and I am lucky because in this island I have found a place like that.

Your Villa in Naxos

Login required for member only features. 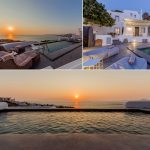